An Education, Research and Cooperation Protocol Signed Between Turkey Maarif Foundation and SAMU 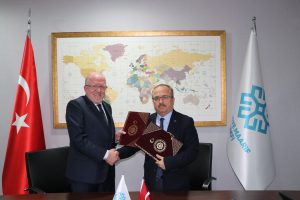 An “Academic, Cooperation and Promotion Protocol” was signed between Samsun University (SAMU) and Turkey Maarif Foundation in order to ensure a solid cooperation between two parties while working in fields such as education, research, academic studies, reporting, and culture.

With the signed protocol, a formal cooperation was reached in order to be able to contribute in areas such as promotion, education, research, exchange of information and documents, provision of curriculum material, all of which are a part of  Turkey’s new cultural diplomacy moves in education, which will be carried out in the domestic and international arenas.

The  Rector of Samsun University Prof. Dr. MahmutAydın, who made some important remarks after signing the protocol,  stated that Samsun University has the potential to attract students from all over the world and carries all the advantages of being a newly established university.

He also stated that this protocol would be a significant contribution to ensure the steps towards becoming a global university. He ended his brief by saying that Samsun University would do its best to popularize and promote Turkish education, introduce Turkey and Turkish culture abroad.

From Usul to Method: The Literature Historiography of M. Fuad Köprülü
December 4, 2020, Friday 10:00-16:30 Mehmed Fuad Köprülü has written dozens of works from different disciplines such as literature, history, politics, law, economics, and religion and has done many studies throughout his life. He is one of the founders name of Turcology and writing history of literature in Turkey. We...

University of Samsun Turkish Course
We welcome our dear new students to Turkish course in the new term. Our Turkish proficiency exam is on 13 August.